“In Devakarya (Hinduism) there is only unique worship, no castes and discriminations. Devotees pray only directly to Lords (Devankal). Temple is only for that purpose. Real Temple Entry Proclamation.” – Kalki. Om Shreem BrahmaDeva ShivaDeva VishnuDeva Namaha. 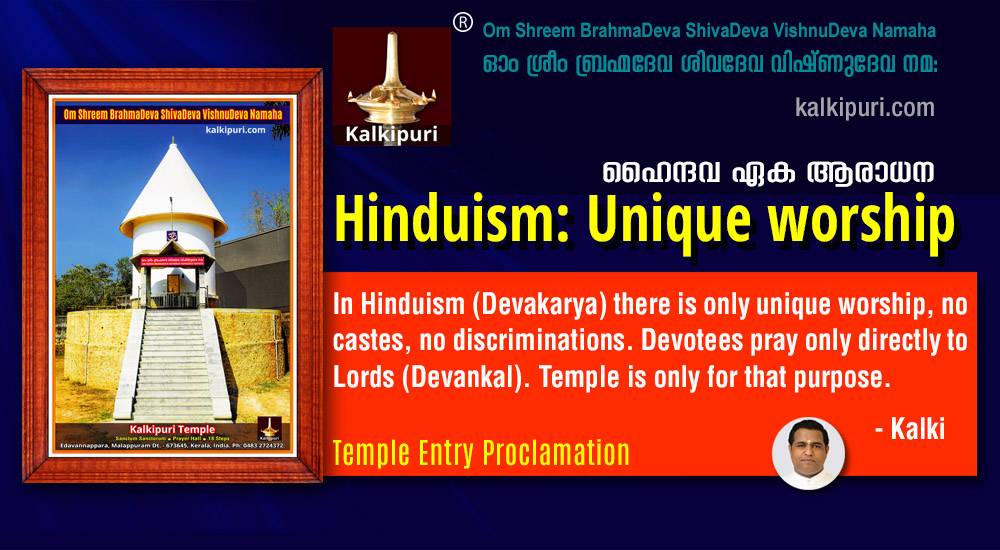 Kalkipuri Temple: Opening: 3am-10pm. Irrespective of caste, religion, sex, menses, *pula, age, colour and nativity devotees can come with cleanliness and walk on 18 steps to prayer hall (Prarthana Mandapam) of Kalkipuri Temple (Prayer Room of Kalki) and pray only with good intention for blessings and protection from the Lords (Devankal).

Deities to be worshipped in Kalkipuri are the Supreme Genetic Authority (Janithkadhikari) Lord Brahma (BrahmaDeva), the Supreme Organizing Authority (Sarvadhikari) and the Supreme Preceptor (Param Guru) Lord Shiva (ShivaDeva), the Supreme Protection Authority (Samrakshanadhikari) Lord Vishnu (VishnuDeva) existing in the light form in celestial spheres Brahma loka, Shiva loka and Vishnu loka are formed from Parabrahma (Sarva = The Whole) by self (Swayambhoo). The words Devankal (to Lords), Devakaryam (Lords Matter- things pertaining to Lords), DevaVargam (Lords Race), Devahitham (Lords Rules), Devabhagam (belongs to Lords), Devanmar (Lords), DevaSmarana (continuous remembrance of Lords) intend the above mentioned only. The most important rule of worship in Kalkipuri Temple is that devotees can come and pray only with good intention for blessings and protection from the Lords (Devankal) without any discrimination of caste, religion, gender etc. “Only if allows’’ is the most important rule of Devakarya.

Lords (Devankal) doesn’t need anything from anybody because Parabrahma by self, perfectly allows everything in Jyothirmandal (celestial sphere) so Devankal doesn’t need anything from devotees. Even devotion is the need of devotees. It is the right and necessity of devotees to get blessings and protection from Lords (Devankal). By divinity, Kalkipuri Temple is a performing system with micro level execution to connect to the Lords (Devankal) and it is a connectivity with recharging facility like mobile tower. Devotees can come, pray and go only at the temple. This is the purpose of the temple. Offerings (Vazhipadukal) are not allowed and must know that devotees have an opportunity to participate within their capabilities for the day to day expenses of the temple only. The chanting of mantra, Om Shreem BrahmaDeva ShivaDeva VishnuDeva Namaha is for the continuous remembrance of Lords (DevaSmarana). When the same words are repeated continuously in its correct form, it remains in the memory with importance.

Idol: Installed by Kalki and it is not for worship. Devotees can pray directly in silence only with good intention to Lords (Devankal) in Supreme Positions existing in Jyothirmandal (celestial sphere) in light form without mediators, without praise, without giving anything to satisfy as per human assumption, without worshipping humans and other species of this planet, without worshipping anything with body which is made of five elements (Panchabhootha) in the name of DevaVarga (Lords Race) and without assuming any figures. This is the most important rule of worship in Kalkipuri Temple. New Model Insect Free Oil Lamp (Patent Pending Application No. 201841003006. International Application No. PCT/IN2019/050054. Design Patent Protected and its first model Design Patent No.225592) is used in Kalkipuri Temple.

How to Use Kalkipuri Insect Free Oil Lamps 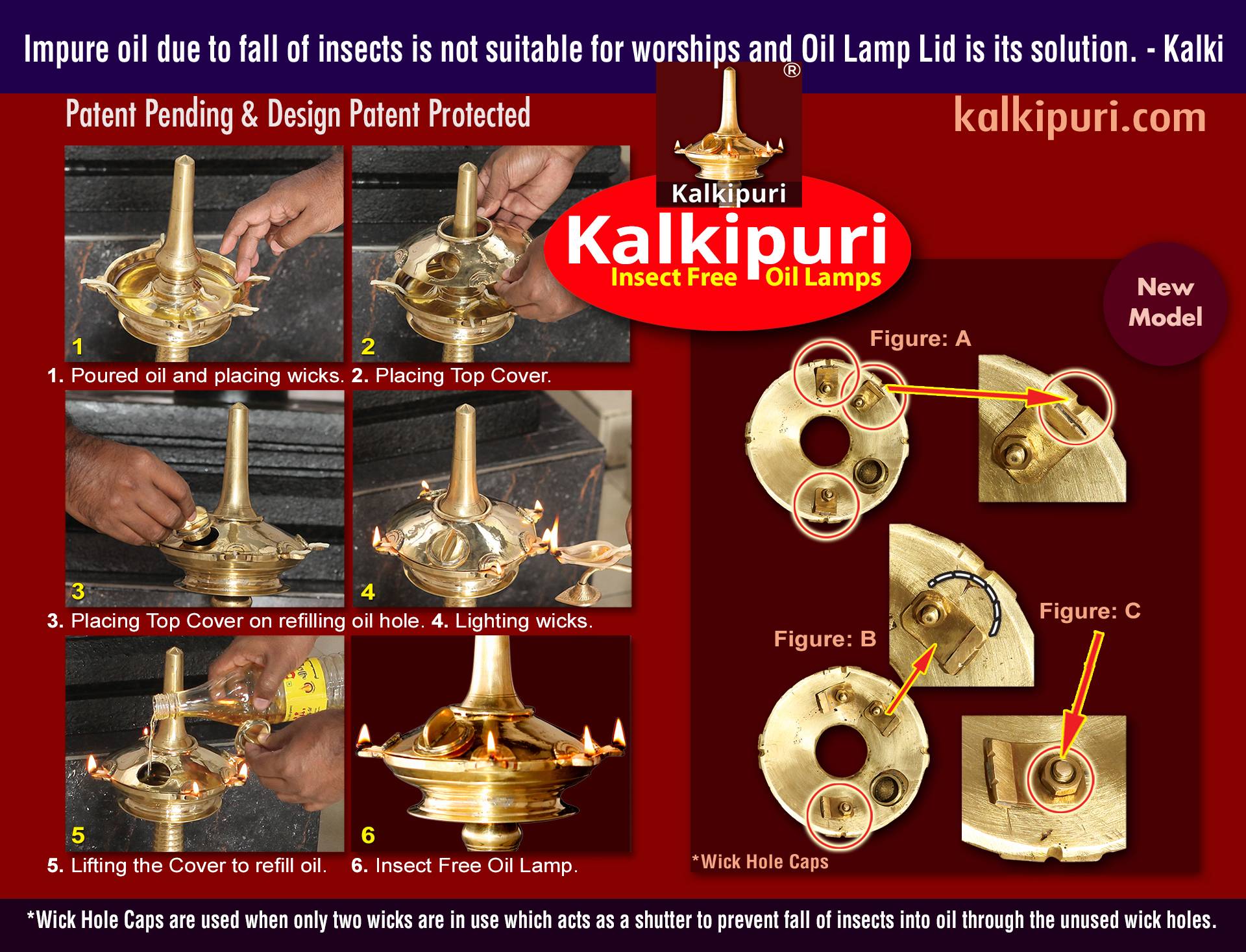 When a specific amount reaches in Bhandaram as deposit for the security of the temple and after completing the construction, then every year only within a specific period with date and time (e.g. Nov-Dec) devotees shall be informed through news and media that they have an opportunity to dedicate in Bhandaram as their prayer for the day to day expenses of the temple. The decision that the amount should be only for temple expenses have much importance. This is the final decision of Kalki about Kalkipuri Temple.

Supreme Genetic Authority Lord Brahma (BrahmaDeva), Supreme Organizing Authority and Supreme Preceptor Lord Shiva (ShivaDeva) and Supreme Protector Lord Vishnu (VishnuDeva) in the light form (not made of five elements) in celestial spheres (Jyothirmandal) Brahma loka, Shiva loka and Vishnu loka respectively with their consort and co-workers Saraswathi Devi, Parvathi Devi and Lakshmi Devi, created from Parabrahma by self and exist only for official duty [Genetic. Organize. Protect. (G.O.P.)]. The words Devimar, Devathakal (Lordess) intend the above mentioned only. There is no need of special worship for Lordess (Devimar, Devathakal). The real photos of Lords and Lordesses in light form (not made of five elements – Panchaboothathmakamalla) are not available on this Earth.

Always Devankal (to Lords) only have the supreme authority to decide and execute which devotee should be blessed. Neither the one who established the temple nor the one who manages the temple or others have authority to interfere. The purpose of the temple management is only to obey the perfectness in Devakarya. Human beings do not have the rights and permission to receive money, wealth in advance as offerings from anyone for getting solutions from Devankal (to Lords).

Not to disgrace is the real grace.

The prayers with good intention which is needed for living will only be fulfilled with the execution of welfare nation through welfare ruling by the supreme position Ruler for Devakarya (Lords Matter) as per Devahitham (Lords Rules).

Idol installed by Kalki . This Temple is situated at Kalkipuri (with a plot extension of 58.472 cents) owned by Kalki in the birth place. The building permit for dome construction was obtained on 7th March 2013 and renewed it. Dome works started on 5 Feb 2016 and completed on 8 July 2016. Completion plan submitted on 3 Aug 2016 and approved by Vazhakkad Grama Panchayath on 8 Sep 2016. During the process, submitted Structural Stability Certificate by Dr. Shine. C. Chinnan. Ph.D ( https://www.facebook.com/Shine-builders-120711364742644/ | shinebuilders.com) as per the rules. Draftsman: Biju P.P. Insect free bronze oil lamp (Design Patent No.225592) is used in the Temple.

Do not enter into the temple compound using drugs and liquor. Smoking is prohibited.

No offerings (Vazhipadukal) in the Temple (Donations, DD, MO, Cheque etc. shall not be accepted). Only one Bhandaram (repository/treasury).

No circumambulation (Pradakshinam-walk round the temple). Oil, camphor, ashes, flowers, garland etc. are not received.

Pooja is not done for anybody. Insect free bronze oil lamp (Design Patent No. 225592) is used in the Kalkipuri Temple. 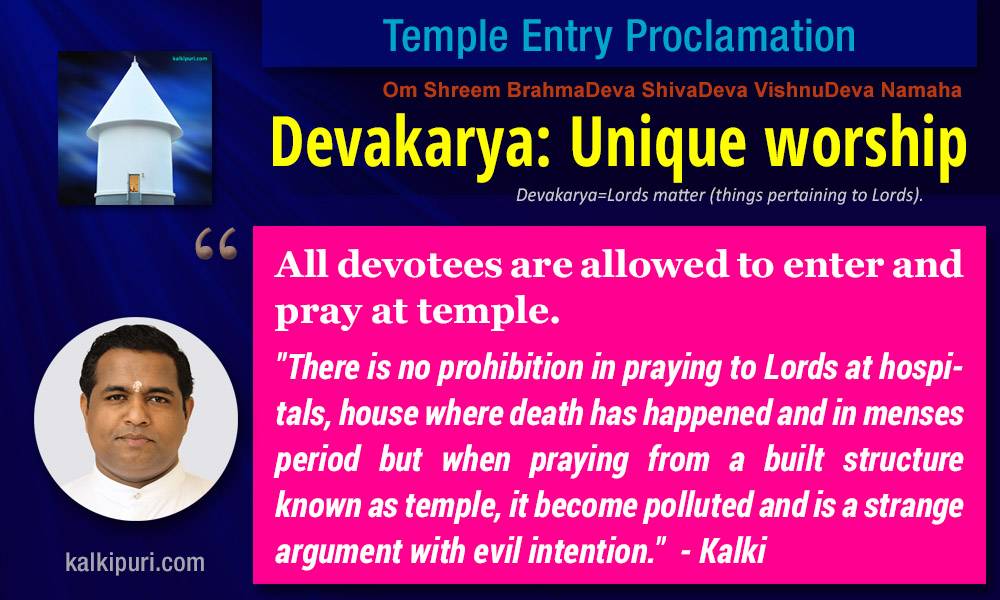 All devotees are allowed to enter and pray at temple.

“There is no prohibition in praying to Lords at hospitals, house where death has happened and in menses period but when praying from a built structure known as temple, it become polluted and is a strange argument with evil intention.”

*Pula: Some people believe it as customary pollution which lasts for a few days following a birth and death in the family that prevents one’s entry to temple. 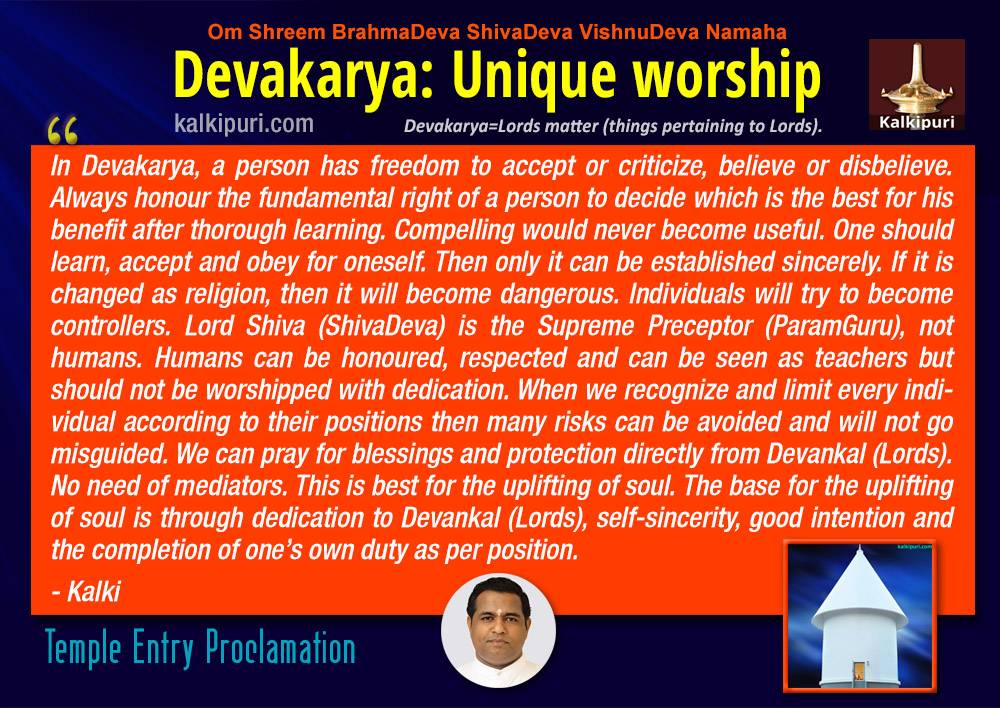 In Devakarya (Hinduism), a person has freedom to accept or criticize, believe or disbelieve. Always honour the fundamental right of a person to decide which is the best for his benefit after thorough learning. Compelling would never become useful. One should learn, accept and obey for oneself. Then only it can be established sincerely. If it is changed as religion, then it will become dangerous. Individuals will try to become controllers. Lord Shiva (ShivaDeva) is the Supreme Preceptor (ParamGuru), not humans. Humans can be honoured, respected and can be seen as teachers but should not be worshipped with dedication. When we recognize and limit every individual according to their positions then many risks can be avoided and will not go misguided. We can pray for blessings and protection directly from Devankal (Lords). No need of mediators. This is best for the uplifting of soul.

The base for the uplifting of soul is through dedication to Devankal (Lords), self-sincerity, good intention and the completion of one’s own duty as per position. 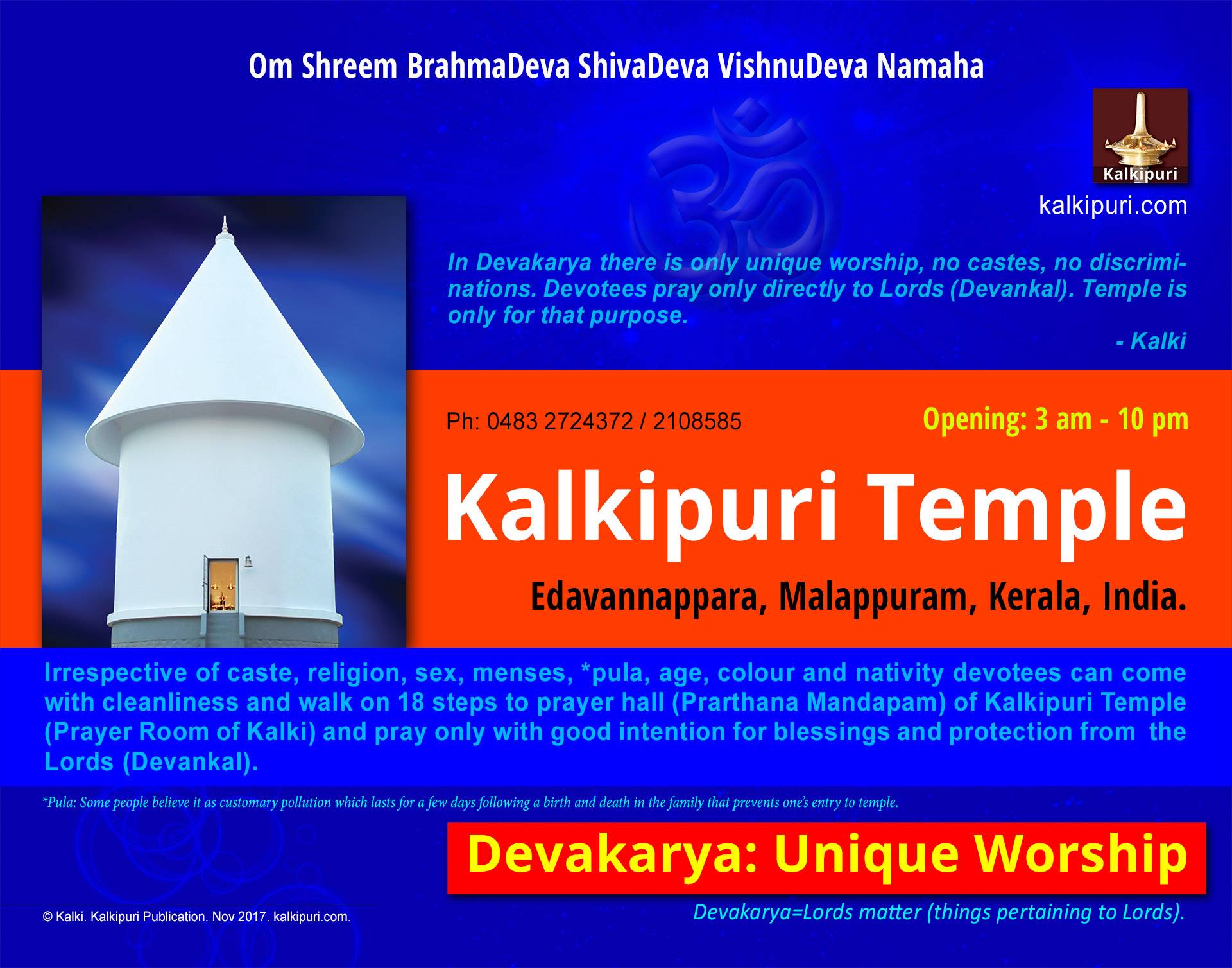 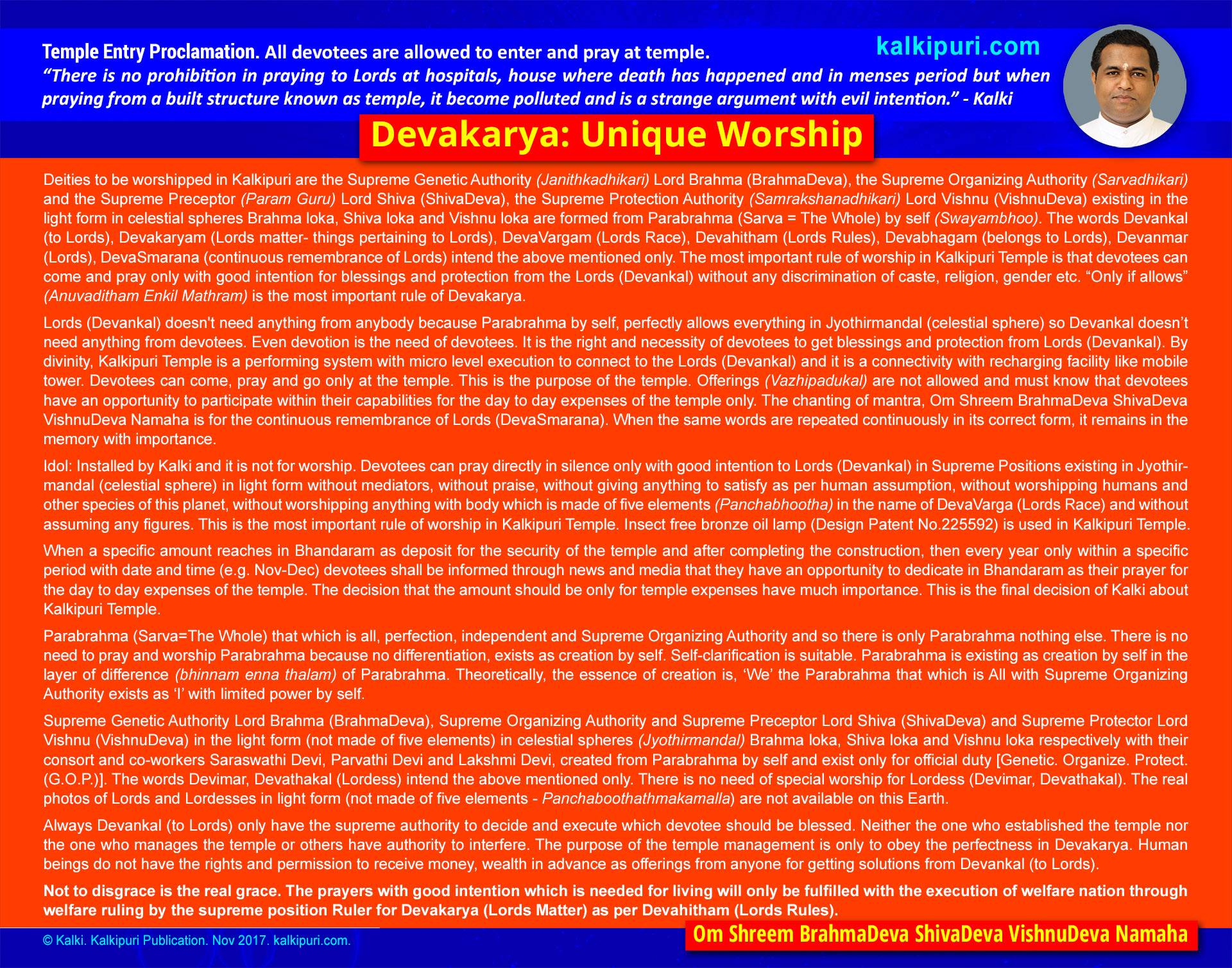 “If the original idol and portraits of Sree Rama and Sree Krishna are available, then will the present portraits and idols made by several artists and sculptures with different image, face, physical structures and colour be accepted?” 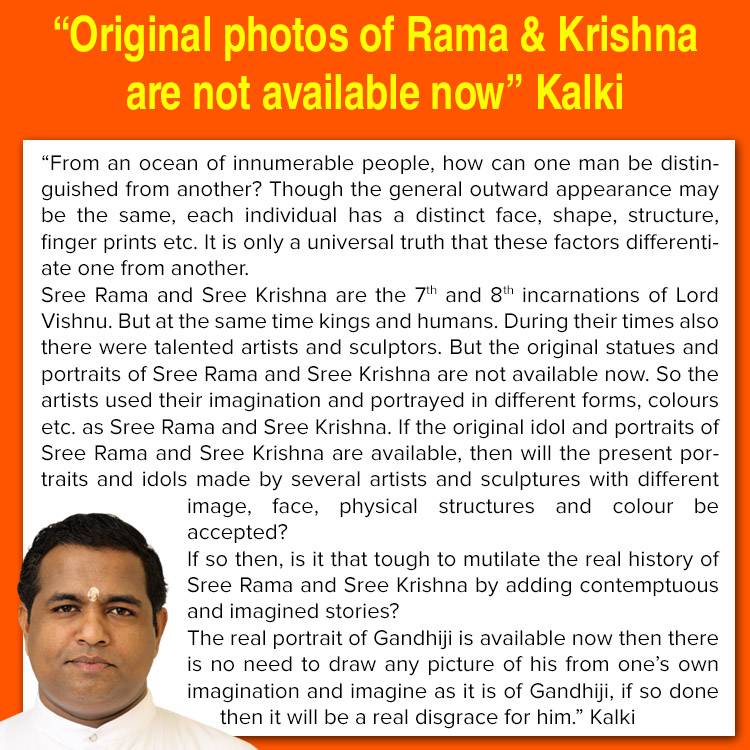 From an ocean of innumerable people, how can one man be distinguished from another? Though the general outward appearance may be the same, each individual has a distinct face, shape, structure, finger prints etc. It is only a universal truth that these factors differentiate one from another.

If the original idol and portraits of Sree Rama and Sree Krishna are available, then will the present portraits and idols made by several artists and sculptures with different image, face, physical structures and colour be accepted?

If so then, is it that tough to mutilate the real history of Sree Rama and Sree Krishna by adding contemptuous and imagined stories?

The real portrait of Gandhiji is available now then there is no need to draw any picture of his from one’s own imagination and imagine as it is of Gandhiji, if so done then it will be a real disgrace for him.

It is contemptuous to think that Lords (Devi Devanmar) couldn’t attain progression in this era of modern technology than humans. The Supreme Genetic Authority (Jenithakadhikari) Lord Brahma, the Supreme Organizing Authority (Sarvadhikari) and Suprem Preceptor (ParamGuru) Lord Shiva, the Supreme Protection Authority (Samrakshanadhikari) Lord Vishnu exists in lightform (Prakasha Swaroopa) in the self enlightened celestial sphere Shiva loka, Vishnu loka and Brahma loka (Jyothir Mandal). They allow blessings based on the belief, devotion, qualification and worthiness of human beings made of five elements (Panchabhoothatmaka shareeram) on this earth (Vayu Mandal). The Jyothir Mandal Shiva loka, Vishnu loka and Brahma loka are quite far from this earth (Vayu Mandal). Lord Shiva, Vishnu and Brahma are in the light form (Prakasha Swaroopa), not made of five elements (Panchabhoothatmaka) and they exist in Shiva loka, Vishnu loka and Brahma loka with most advanced technological progression which is unattainable by human. The devotees themselves have ignored this reality and it is impractical to think that the Lords still use weapons like sword, trident and bludgeon even in this modern scientific age.

How to Use Kalkipuri Insect Free Oil Lamps 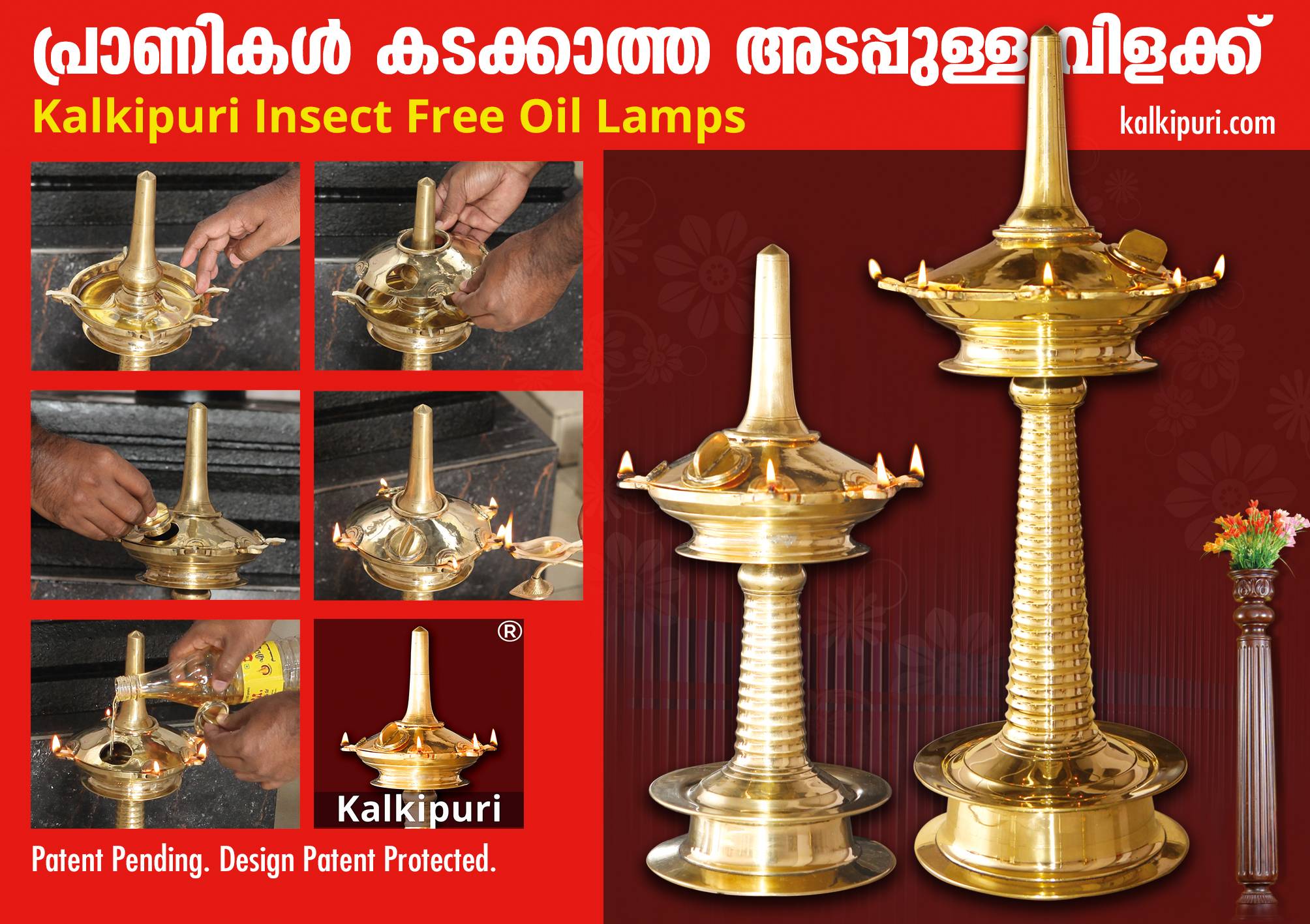