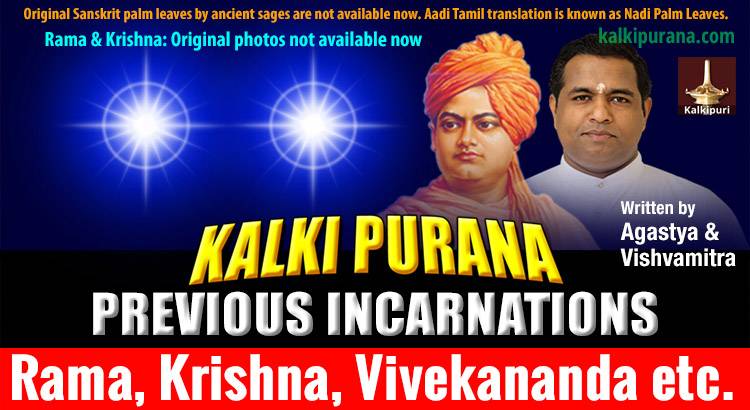 Unduthaan Sukshmankal Oraipenippam=also there are several other minute divine secrecies like that is informed now.

Lord Shiva said to Parvathi Devi, when Kalki was Sree Krishna, there were several divine secrecies.

Lord Shiva informed Parvathi Devi, when Kalki was Sree Krishna, He saved Droupadi (also called Panchali, being the daughter of Drupada-the King of Panchala) to be the wife of Arjuna only, one of five Pandavas.

Before Sree Krishna, Kalki incarnated as Sree Rama (7th incarnation of Lord Mahavishnu) for the fulfillment of real welfare rule. At that time, You have destructed evil forces and practically implemented the real welfare rule and proved how to do the duties and responsibilities between family members and people as per justice and morality with their position in the country. Lord Shiva said.

Before Sree Rama and After Sree Krishna, Incarnated Several Times

Recent Past Birth As Vivekananda

Lord Vishnu took birth as Swamy Vivekananda and did several moral activities related with spirituality and temple work. At that time, I called Him back. After that, now incarnated as Kalki. Lord Shiva said to Parvathi Devi.

The recent past birth of Kalki was in Bengal (Vangadeyam). At that time, born as Narendra Dutta, later changed the name to Vivekananda and the name of Preceptor (Guru) and His wife (Guru Patni) are same as that of the parents in this birth. Lord Shiva said to Parvathi Devi.

(Sree Ramakrishna Paramahamsar and Sarada Devi were Guru and Guru Patni and the parents in the present birth are Ramakrishnan and Sarada. Thus the name is same. The word ‘Sree’ is used as salutation and Paramahamsa is not a name but it is considered as a spiritual stage. Here the word ‘Devi’ is used as an honourable salutation. Real Devi and Devan exist  in Jyothirgolam or Jyothirmandalam- Lord Shiva and Parvathi Devi in Shiva loka, Lord Brahma and Saraswathi Devi in brahmaloka and Lord Vishnu and Lakshmi Devi in Vishnu loka in the light form (Prakashaswaroopa).

Vivekananda was the follower of His Guru and executed several moral activities to attain integration and  progression for the poor people. Vivekananda constructed the temple and morally awakened the nation by divine knowledge. While involved in the divine mission, Vivekananda returned without completing. Now, Vivekananda has reincarnated as Kalki for the completion of the divine mission.

In the ancient time, in Shiva loka, Lord Shiva informed Parvathi Devi about several people living nowadays which the saints like Agastya, Visvamithra and Vasishta Maharshi had seen in their meditation and wrote it clearly in Sanskrit language according to the Lord’s command. Later, Thanjavur King Sharabhoji II (Serfoji 1777-1832) with the help of scholars translated it to Aadi Tamil language and named as Nadi Astrology. Thereafter, though the Britishers acquired possession of these Nadi Palm Leaves, they sold it to some families. Now these Nadi Palm Leaves are available. Nadi Palm Leaves are stored at Vaitheeswaran Koil in Tamil Nadu. Read More